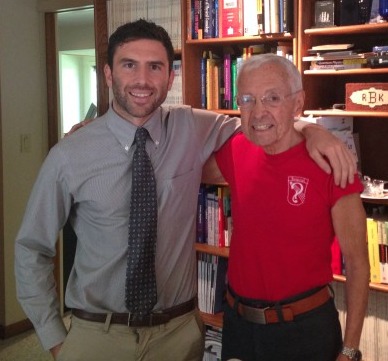 For those who may not know, Dr. Richard K. Bernstein is a world-renowned advocate for diabetes care and author of several best-selling books on the subject.  Now 80, he developed type 1 diabetes when he was just 12 and spent the next 20 years following the standard regimen of high-carb meals, roller coaster blood sugars, and inevitable health consequences.

Well into adulthood and already suffering many complications from the disease, he eventually managed to acquire a blood sugar monitor (at the time, in the 1960s, blood sugar could only otherwise be tested by doctors in hospital laboratories). He found that by reducing his carbohydrate intake he could normalize his blood sugars, meaning he achieved non-diabetic blood sugars with the appropriate amount of insulin, of course, and thus he could reduce or reverse most diabetic complications.

He wrote a paper on his findings, but could not get it published, so in his words, “I couldn’t beat ’em, so I had to join ’em.” Ryan Attar has lived with type 1 diabetes for 12 years. He was diagnosed at 27 years-old while overseas serving as a captain in the United States Army.

Discharged immediately following his diagnosis, Ryan has spent the last several years training to become a Naturopathic Physician (ND), and will be opening his own integrative medical clinic in Connecticut in early 2019.

At 39 years old, Ryan has made sure living with type 1 diabetes doesn’t slow him down.

“I eat a low-carbohydrate, high-protein diet. I don't exactly call what I do ketogenic, even though I am probably in ketosis quite a bit,” explains Ryan. “I never chase ketone numbers, or worry about being in ketosis, but instead just go for normal, non-diabetic blood sugars (80s and 90s) and a non-diabetic HbA1c.”

“I generally eat lower in fat than most low-carbers,” adds Ryan. “Always high-protein and always very low-carb. I keep fat generally lower unless I am very active. I do this for no reason other than fat is a very dense calorie source. It’s easy to overdo fat and not stay as lean as I'd like to be.”

He’s also a big fan of The Bernstein Dietand has incorporated a great deal of Bernstein’s nutritional philosophies into his own life with diabetes. (He even shadowed with Dr. Bernstein for three days in his medical practice!).... 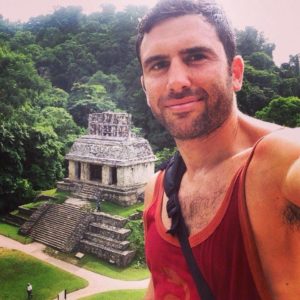 Ryan Attar, age 37, was diagnosed with type 1 diabetes a decade ago. At the time, he was stationed overseas and serving in the United States Army as a Captain and subsequently medically discharged. Right now he is in his last year of naturopathic medical school and just finished his master’s degree in nutrition. He’ll be a naturopathic physician in Connecticut at the end of the year.

There is a small population of people with type 1 diabetes who eats a very low-carb diet like the one Dr. Richard Bernstein recommends for the purpose of “normalizing” blood sugar levels. He writes that he was lucky enough to be able to spend some time with Dr. Bernstein at his office and blogged about it on Diabetes Daily a few years ago.

Ryan says he makes no insulin endogenously according to his c-peptide tests and has been eating low-carb for about 7 years and yet, has a latest A1c level of 4.9%. He took the time to answer my questions regarding how and why he follows this way of eating.

DD: Why do you choose to eat low-carb?

I want to live complication-free. The complication of diabetes all stem from the damage that occurs during hyperglycemia.  A normal, healthy eating, insulin sensitive individual is almost always between 80 to 99 mg/dL. For many people with diabetes spiking up above 120+ after meals is standard. Damage from elevated blood sugars happens much lower than most think. I like this summary of studies on that topic..